Make Do and Mend Year has written a blog post called “Taking Stock” which is one of the assignments on her blogging course.  It sounded like fun and I could do with some writing practice myself so I’m giving it a go.

I’ve split it into multiple parts though as it was a very long list! 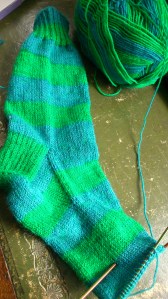 Making : I have two main projects on the go at the moment.  Socks for Josh and bunting for R’s birthday. I love the speed of sewing but it requires some set up and I don’t always have a clear stretch of time to get stuck in. Bunting I can sort of do bits here and that (especially the cutting out) but my first love is knitting, portable, easy to pick up and put down and no minute of waiting at the doctors or for a bus is ever wasted.
Cooking : It’s Josh’s turn to cook dinner tonight not me but I know we are having a vegetable tortilla.  Since we have guests coming tomorrow though, I’ll be cranking up the bread machine and getting a loaf ready.  Our standard loaf is 50% strong white flour and 50% wholemeal spelt flour and it is very tasty!
Drinking : Diet coke – my main vice.  Terrible stuff and (I’m sure) horrible for the environment.  Something I am still working on.
Reading: I always have a million and one books on the go but the main thing I’m currently reading is “The Wizard Hunters” by Martha Wells.  It is part of a huge box I got from a friend when they were downsizing their book collection and it’s taken me ages to get round to reading it but it is good solid fantasy with a slight steampunk twist  and several interesting and well-drawn female characters. Just my sort of thing.
Wanting: Chickens!  We are in the planning stages for getting chickens.  First working out how big a coop to build, then sourcing the materials and building it, then buying a hen house and finally a feeder, food, water thingy and actual chickens.  We are still a way off getting them but we almost have a plan!
Looking: For some replacement Courgette plants – the slugs have done for ours and the garden centre has sold out.
Playing: We recently bought two new board games (we have a huge collection of board games and role-playing games) Race for the Galaxy and Ghost Stories.  We have been playing them a lot!  Definitely getting our money’s worth.
Deciding: How high the fences for the chicken coop should be and whether we need a lid on it.

Wishing: Death to slugs.  They are decimating the garden, I lost two most cucumbers to the little monsters this morning.  My slug traps are doing well in the veg patch but poorly up with the courgettes and it is hurting.

Garden is coming on (just ignore the weeds).

Much of my current garden news is above – mostly am in full blown war against the slugs. My perennial enemy.  They have now decimated 4 cucumbers, 2 courgettes, 2 squashes, all the chillis, one entire salad crop and one purslane crop.  I hates them precious.

Currently I’m deploying my standard beer traps, but the weather has been so wet and mild for so long I bet this is going to be bumper slug year.  So I’m reading this article with great interest especially the bit about Indian Runner Ducks!

What a trying day!  Well not really but for about two hours this evening it felt like it. 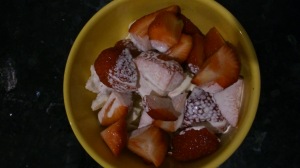 When the going gets tough, the tough, eat a bowl of Eton Mess the size of their head!

I worked hard (at my paid work job) all day, really worked my socks off on a report.  It was a huge chunk of work and I was feeling really good about getting so much done.  Then as I tried to save it to the Network something happened – I don’t know what but it corrupted the file horribly.  The only version which escaped was saved at 10.19 am – I had finally finished the report at 4.30pm. I’ll be spending most of Monday redoing the whole thing.

Much swearing happened. I might appear delicate on this blog but in real life I sound like a proper potty-mouth.

But as soon as dinner was eaten and a fat little baby was sound asleep I was determined to banish the blues and headed out into the garden.  Setting slug traps was a grim therapy but a good job done.

I use a small plastic container (like a small yoghurt pot) filled with cheap, cheap beer.  The sluggy demons have eaten my entire lettuce crop, my entire purslane crop, the best courgette and 3/4 of my Mooli.  I will not be beaten.  I laid a good number down and I have a lot more left to do before this war is over.

On the way down to the veg patch I saw the first dogrose of the year.  I missed making anything with rosehips this Autumn and hopefully I’ll do better this year.

The pigs have been in a great mood all day. They are growing in confidence, getting much happier with handling and starting to move into the part of the pen which is overgrown (which we would like them to eat through!). Banking up the potatoes (again!) they came out to see what I was up to and had a good rummage around. 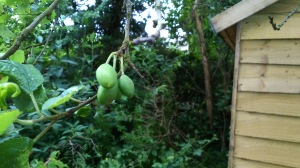 The damson is covered in little green fruit. I already know how amazing it tastes from last year so I’ll be preparing early to make the most of the harvest in jam, jelly and baking.

After a good 45mins in the garden and a large bowl of Eton Mess all is right with the world again and I’m finishing some knitting.