Over the weekend the 4 month wait to sample our own Westwick Ham was up.  It was a very exciting moment and really lovely that my Dad who helped us make it 4 long months ago was here to sample it.

Soon after they arrived I took it down from the Verandah ceiling.  It was as hard as wood which I took to be a very good sign.  No squishy bits and no foul smell. When I unwrapped it it looked less than inspiring, a bit of mould on the outside but again nothing to indicate it was rotten or otherwise good to eat.

I think in this day and age where most food is neatly packaged in plastic, looking completely sterile the idea of eating meat that has not been cooked and in fact has been hanging in my verandah miles away from a fridge or freezer is… disconcerting.  But I trusted to Hugh Fearnley-Whittingstall and the millions of farmers (especially Italian and Spanish) who have been there before me.  I am so pleased I did.

I gave the ham a good sniff and it smelled like… well like Parma Ham. Then we tasted it.  It was delicious,  salty and just like Parma Ham! 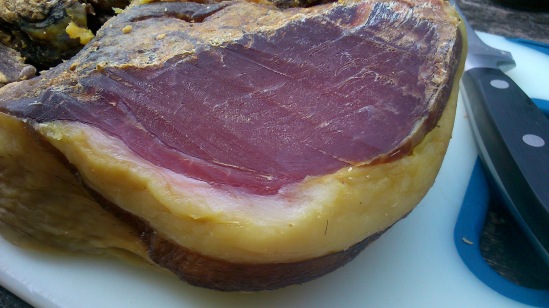 We carved up a big batch (that took forever by hand (this stuff really is like wood!) to take to my Uncle and Aunt’s House warming party and paired it with some dried apricots to take the edge of the saltiness of the Ham.  It was a huge hit and it was totally exciting to contribute something so unusual that we had made.

Next time we will be making double the quantity and we are thinking of looking for a second hand meat slicer because it really was very hard to slice.

I’ve never made Ham Hock before and I think I’ve only eaten it once before and it was called a pork knuckle.

So knowing we had a homemade Wiltshire Cured Ham Hock in the freezer begging to be eaten sent me running to the internet for inspiration. I expect you could buy a hock from a good butcher, but I haven’t ever seen one in a supermarket and it isn’t a cut I am very familiar with. 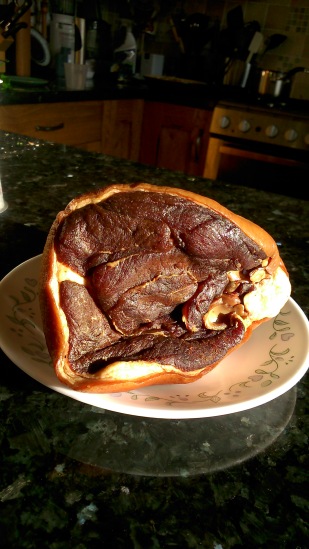 It is a tough cut of meat with lots of tendons and ligaments but as you know these are perfect for long slow cooking.  I remember when cuts of meat like this use to be considered thrifty but I don’t think they are anymore.  For example lamb shanks (which is the same cut on a lamb) can be quite expensive.  At £10 a kg they are still cheaper than chops (about £15 a kg) but it isn’t like lambs’ liver at £2.22 a kg!

I believe in paying for good quality meat with the highest ethical welfare standards and that comes with a higher price tag I’m prepared to pay (and then eat lentils for the rest of the week).  But formerly thrifty cuts of meat have become very fashionable here in recent years and that seems to be driving some of these prices increases (not an increase in welfare – although lamb is much better than pork in that regard) which is a shame.

Finally these cuts of meat that require long, slow cooking aren’t as thrifty anymore because of rising energy prices.  A while ago a read a great article on A Girl Called Jack’s blog (I think) which pointed out that energy prices are now so high that many people can’t afford to have the oven on for 3 hours to cook a tougher cut. A very good point!

I do think there are two short cuts to the last problem.  Firstly slow cookers if you have one – they use a fraction of the energy.  Secondly a haybox – which continues slowly cooking the meal on residual energy.  I’ll be using a slow cooker for my meal here and I’d like to look into hayboxes as well. But I do accept that both these solutions might require resources/skills which many people wouldn’t find easy to come by – so cheaper cuts, still not as thifty for most people as they used to be.

Back to the cooking and away from the ranting.

This was the most useful starting point: http://www.bbcgoodfood.com/recipes/1341/ham-hock-and-lentils.

Partly because I already have a half box of Puy Lentils to use up.

After reading a number of recipes I decided to slow cook the hock in the slow cooker for 3 hours until it was falling off the bone and making lots of lovely stock, then use that stock to cook lentils and shred the ham on top.  I don’t cook a lot of whole meals in the slow cooker because it seems to make everything taste a sort of pallid pale brown.  But I do use it to help me cook bits of meals – dried beans, stock and pulled pork are where the slow cooker really comes into it’s own. This is one of those occasions when it will be vital, I need to cook the meat for a long time but I don’t want to constantly checking on it.

Slow cookers use considerably less energy than the oven or gas hob would for the same purpose. So this will save me money as well.

The lentils are cooked with onion, carrots and the dreaded celery* in the stock from the Ham and then served shredded on top.

*Dreaded because whilst I don’t like it, I don’t love it and sometimes it feels like there are painfully few ways of using it up.  Probably fodder for a future blog post.